IIC 2020:”Key Economic Challenges of our Times” by Nouriel Roubini 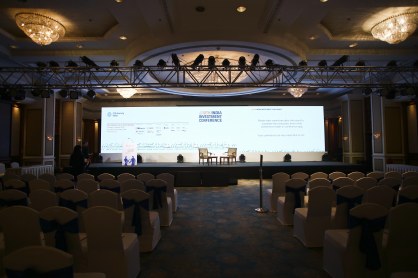 The last session of the 10th India Investment Conference, drew huge crowd to listen to the keynote speaker of the event. Nouriel Roubini, renowned economist, author and global strategists, spoke on “Key Economic Challenges of Our Times”. Roubini outlined four scenarios for the current states of the global economy and went on to elaborate each of these four situations. The global economy, as it stands today, can have the four possible paths:

During 2017 the global growth was above trend and the world economy grew to 3.8% wherein most of the global economies were growing in a synchronized fashion. In 2018, the global economy was still positive but it started showing signs of slowdown as the growth descended from 3.8% to 3.4%. Firms were worried about future and they stopped spending on capital expenditures. As a result, in the 4th quarter of 2018, the US broad market was down by about 20 percent. This was a case of synchronized slowdown.

Dwelling on scenario 1, i.e. the situation of moderate expansion of 3.4%, Roubini cited various reasons for the same: the phase I deal between USA and China, recovery of capex, Brexit is now certain and going to be soft and possible massive easing of monetary policy. Scenario 4 of global recession is much less likely with a caveat of Iran & US going to war and that may change the whole situation. Scenario 2 of continuation of slowdown (growth of around 3%) is much more likely according to Roubini.

In November 2015, a delegation of USA and European countries went to Beijing and they heard the Chinese Premier Xi Xinping quoting ‘Thucydides Trap’ – Coined by Harvard professor Graham Allison to capture the idea that the rivalry between an established power and a rising one often ends in war[1]. According to Xi, every time a power rose, someone else challenged it and the transition was very painful. For China, fortunately, there has not been much opposition. This situation was pre-Donald Trump election. The situation, however, turned out to be very different after Trump came to power. What we are witnessing in today’s world between China and USA is decoupling from globalization. The 5G argument of USA for not allowing China will lead to balkanisation of global economy. Going forward, with the advent of internet of things (IOT), every gizmo that we will be using will be having chip that will be connected to internet. That particular machine may be of Chinese origin and even if it is powered by technology coming from elsewhere, the Chinese company may still get to know the relevant information about the supply chain. Hence, there is no way for the world to go back from here.

The third scenario of further slowdown is also possible as PMI, ISM & other activities are showing. It might take a quarter or two before the economy bottoms out. The USA is doing okay as shown by the growth of S&P and given that the unemployment is low. However, India is witnessing sharp slowdown. If Bernie Sanders or Elizabeth Warren is nominated, we can see 10% correction in US market from here. Two aspects of the US Economy one should worry – one is this is late expansion of economic cycle for the past ten years and there is huge build-up of corporate debt financed by shadow banks and there are exotic CLOs and leveraged loans, high yield and junk bonds issued by corporations. The valuation of US market is frothy as the CAPE stands at 30 at this moment and this is three standard deviation over the historical trend. The growth rate of EPS is slowing sharply. The 30% rise in US market was driven by increase in P/E and not by increase in EPS. China is going to slow marginally. Latin America is seeing riots in many parts and so is the condition of the middle east. Argentina may default on its debt obligations. Russia is not growing much and India is also not doing well. The Eurozone saw growth of 1% last year, however, this year too it is not going to be any better. The largest economy of the Europe, Germany, escaped recession last year. Italy has a fractured government and the Europe will need structural reforms. The EU is drifting below China & the USA in terms of technology. The good news is the EU is not breaking up as was feared sometimes back and there is no hard Brexit. There are four ‘d’s that is responsible for global slowdown, and, they are

Aging is key problem in Emerging Markets especially in China and Russia. India will need 1 million jobs per month. Some individuals are fighting against the autocratic regime in different parts of the world.

The market is under-pricing the US-Iran conflict. There are four scenarios of this conflict:

What are the implications for macro policies under the four scenarios?

Under the four scenarios, as enumerated above, the implications for asset markets will be as under:

Replying to a question, moderated by Ridham Desai, Managing Director, Morgan Stanley, on how he views India, Roubini highlighted couple of remarks. There are problems at fiscal fronts, rural India, bad debts of corporates, infrastructure bottlenecks, labour market reforms. The good thing that happened is there is bankruptcy law now in India.

Responding to question on US-China cold war, how it would affect India, Roubini remarked that on technology and software front India has done well but not as successfully as China did in terms of low value-added manufacturing.

Whether Trump’s policy is good for china? He opined that Trump may damage China in the short term. In the medium term, however, China will not be stoppable. Many other democrats would be more harmful for China than Trump is.

On a question on his views on cryptocurrency, he explained that it is a total misnomer. There are functions of a currency and Bitcoin fails on all these counts: medium of exchange, measure of value, scalability issues and store of value. He further elaborated that nothing is being priced in bitcoin; there is so much volatility in its price; hence, it will never be a true currency. His preferred asset class would be: underweight US & global equity, overweight in fixed income and utility sector and gold. He would like to keep some cash until things turn out to be better. US Dollar and US Treasury look safer at the moment. Gold may continue to shine due to central bank’s policy; he sees an upside of 5 percent from the current level. ECB is doing policy easing; Japan is also doing QE. In terms of technology spending, China is more advanced than the USA; there are no 5G in USA and China can’t be contained. Chinese economy is government driven. The US growth has come from acquisitions from private firms.

This entry was posted in Events. Bookmark the permalink.